While there is a Master List on the LJ already, I wanted to do my own version and include some new materials that I think will benefit the Ai no Kusabi fandom. I was able to find a lot more official Ai no Kusabi content a few years back and want to share it with the fandom. I know how many fans have been desperately trying to find them for years.

However, because the series is old, the fandom is small and scattered all over the world, and content is only available in Japan, there will be some materials that will not have any links or sources to them. If any fans know where to find some of the missing content on the list or wish to include additional info, please contact me so I can update it. Due to the word limit on LJ, the Master List is split into three parts. Part 2 can be found here and Part 3 can be found here.

Hiya, guys. I thought I should share this with the community and other Ai no Kusabi fans: A fan on Twitter asked Y. Chang, the script writer for the second and fourth episodes and voice actor for Daryl, how he created the additional dialogues in the English dub, which I mentioned in my review post of the Blu-ray. Check out what Y. Chang said in the tweet below. :) 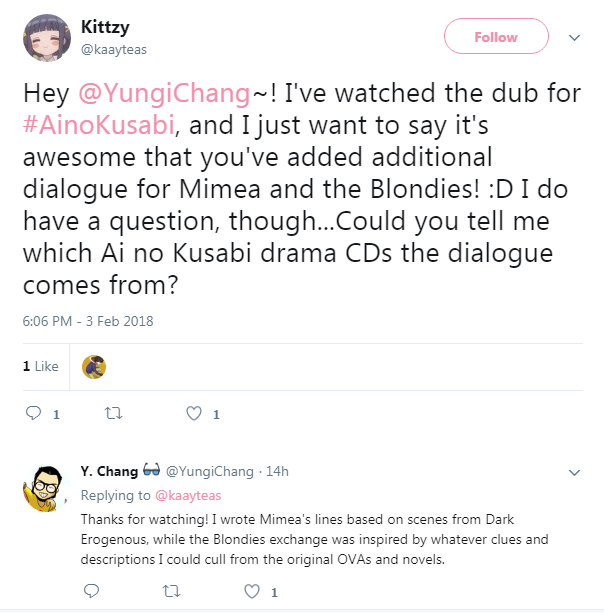 I was wondering if someone had a copy of the Gin no Requiem CD Translation to share with me, since it's from the same author of Ai no Kusabi. I've tried links from aarinfantasy but all of them are dead. Help me, please.

I was organizing my Ai no Kusabi collection when I realized there is no unified list of all official Ai no Kusabi content, which is a real shame because it means lots of fans miss great stuff like the wonderful side stories. This is work in progress so I need your help to fill in the blanks, correct mistakes and verify information (marked with ???).

Novel:
[Click for Ai no Kusabi novel information]1986-1987 Ai no Kusabi (magazine serialization).
This is where the story was originally published over 6 issues of the yaoi magazine Shousetsu June. It includes a few illustrations.

1990 Ai no Kusabi (hardcover).
The 6 parts that were published in the magazine were slightly reedited and assembled into one hardcover book. This version did not have any illustrations.
Translation: A partial fan translation is available here but no longer updated, it was first translated from Japanese to Spanish and then from Spanish to English.

2001-2010 Ai no Kusabi (paperback series).
The story was expanded and some parts rewritten and released as a series of 6 paperback books. Each volume includes several illustrations.
Copyright issues led to a situation in which the paperback series was released by two different companies in Japan, using different illustrations and covers, and the English version is a combination of both of those releases - read more here.

Translation: The series was officially released by DMP manga via their yaoi imprint, Juné, as an 8 volume series. The official English release of volumes 7-8 were found to be very lacking and so there are partial fan translations for important parts: volume 7 misc., volume 8 ch12, volume 8 ch13, volume 8 misc.
Additional languages: French (ongoing by yaoi-ouji).

2012: Ai no Kusabi (4 parts).
Known as the 2012 remake, 4 Episodes were released out of 13 planned but further production stopped, apparently due to poor sales and lack of funding.
Translation: There are 2 official English releases - 2013 edition with English subtitles by Media Blasters and 2018 edition with English dubbing by Anime Works, both can be bought cheap at Amazon etc. Additional languages: French (by yaoi-ouji).


Drama CDs:
[Click for Ai no Kusabi drama CD information]1989 Ai no Kusabi audio book (???An audio book released on cassette???).
1993 DARK-EROGENOUS (Covers Riki’s training. Translation: Yes, here. Check the bottom of the page for the subbed visualization).
2000 Shiozawa Kaneto Memorial (???A digitized re-release of the cassette audio book from 1989??? in memory of voice actor Shiozawa Kaneto).
2007 〜DESTINY〜       (Covers Iason and Riki’s meeting and Riki in the black market. Translation: 1 2 3 4 5 6 7 (in progress)​).
2008 〜NIGHTMARE〜 (Covers Riki's time in Eos. Translation: None available).
2008 〜RESONANCE〜 (Covers Riki's time in Eos up until his return to Ceres. Translation: None available).

Soundtracks:
[Click for Ai no Kusabi soundtrack information]Note: Several tracks on these soundtracks contain character monologues but none of them have been translated yet.


Side Stories:
[Click for Ai no Kusabi side stories information]Note: This section is probably missing a lot of information. Please let me know if you have anything to add.

1996 Midnight Illusion (A full length book released in 1996).
Summary: It's possibly a prequel but not much is known about this yet.
Translation: None available.

2010 Illusion Night (A short story published to mark the end of the paperback series in 2010).
Summary: Riki is unsure of his feelings towards Iason after being moved to Apatia.
Translation: Yes, translated by

rainbowfam. Chapters 1-2 have not been translated by anyone yet.

2012 Kizu (Included with the Drama CD 〜RESONANCE〜)
Summary: Bison is celebrating a victory against a rival gang but Riki can't stop thinking about his encounter with a Blondie...
Translation: Yes, translated by

2012 Musk (A short story published in Chara magazine Vol. 25).
Summary: Riki's life after his return to Eos.
Translation: The first 4 pages were translated by

subaru_san. The rest is not yet translated.

I'm rather new to the series as a whole, and I've managed to compile a track listing for all the CDs including dates of publication and CD codes (whatever they're called). In some cases there was some confusion as to the exact titles of some of the tracks, so I was just wondering if anyone knew where I can find some scans of the track listings pages of each CD's booklet. In fact, if you can tell me where to find scans for the entire booklets of each CD, if such exist, that would be nice. Regarding the three drama CDs Destiny, Nightmare and Resonance, what exactly are the contents of each one? I couldn't find any info about their plots. Another question I have is whether an instrumental CD really exists. This torrent lists one, but it has several mistakes, including titling the Music Best CD as a "mix" CD and several of its tracks not matching the track listing I've found for it.

In terms of DVDs, I found these while searching for information about the CDs:
- OAV Anniversary Special DVD
- Special Appendix OAV Anniversary Special DVD (I believe this one comes in the same Chara Vol. 25 that included Musk)
I was wondering if anyone knew what these are and what their contents are? If so, have these DVDs potentially been ripped and uploaded somewhere? If not, is there anyone who owns them and might be willing to rip and share them?

I was also wondering what this is, if anyone knows.

The last thing I wanted to mention is regarding Musk, of which

rainbowfam translated the first page. In case anyone is interested, I found this raw while doing searches about the novels.

Surpringly, I found some tracks from the remake CD Dramas for Ai no Kusabi after a lot of searching. They're on a site called Mp3linova. However, it's not all of it and out of order. Still, I thought it'd be cool to share it with everyone since it's hard to find anything relating to the series.

Also, remember to support the Ai no Kusabi franchise by buying the DVDs that are set to be release on April 23, thanks to Media Blasters. If the DVD sells well enough, then AIC might have enough money to produce the next eight episodes for the 2012 remake! Spread the word, and buy the DVDs so AIC can get the money to continue our beloved series. You can order at these websites like Rightstuf and Amazon. :)

I’ve written some piano sheets for new OVA Opening , 2nd ending and 4th ending. Since I used “tried version” software to edit the score, some minor details (such as the change of tempo) are missing… pls bear with it.

Here’s the OP PIANO COVER played by me and has been uploaded to Youtube:
https://www.youtube.com/watch?v=Zo42qFKhS9o&feature=relmfu

ED2 played by ear (by me), I made up the left-hand part so it's not the official version.
https://www.youtube.com/watch?v=hFEYIha2P7w

Many thanks to Ptellenic for spending 4 days to write the ED2 piano sheet, (different from my piano cover) which she believes has 95% accuracy ;)
http://www.mediafire.com/?d9oxa3r59ud1uc9

I'm trying to organize my music files and I have a bunch of questions that I hope the community can help with.

Thanks in advance for any help!
Collapse