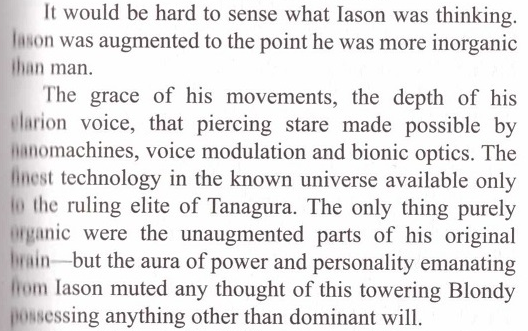 Usually, It would be hard to sense the inorganic nature of Iason.
The grace of his movements…….. bionic optics.
The difference between blondie and other elite was obvious: the gap of absolute hierarchy.
The only thing purely organic were the unaugmented parts of his original brain, but the sense of existence of Iason overwhelmed his artificial nature.
When the Bison’s member knew the one standing in front of them was Tanagura Blondy, they wondered what kind of joke this was, and started to petrify. 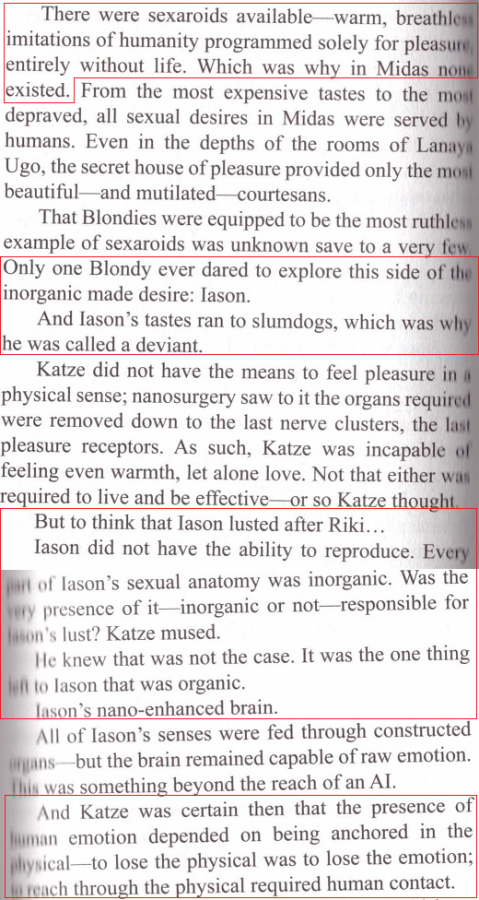 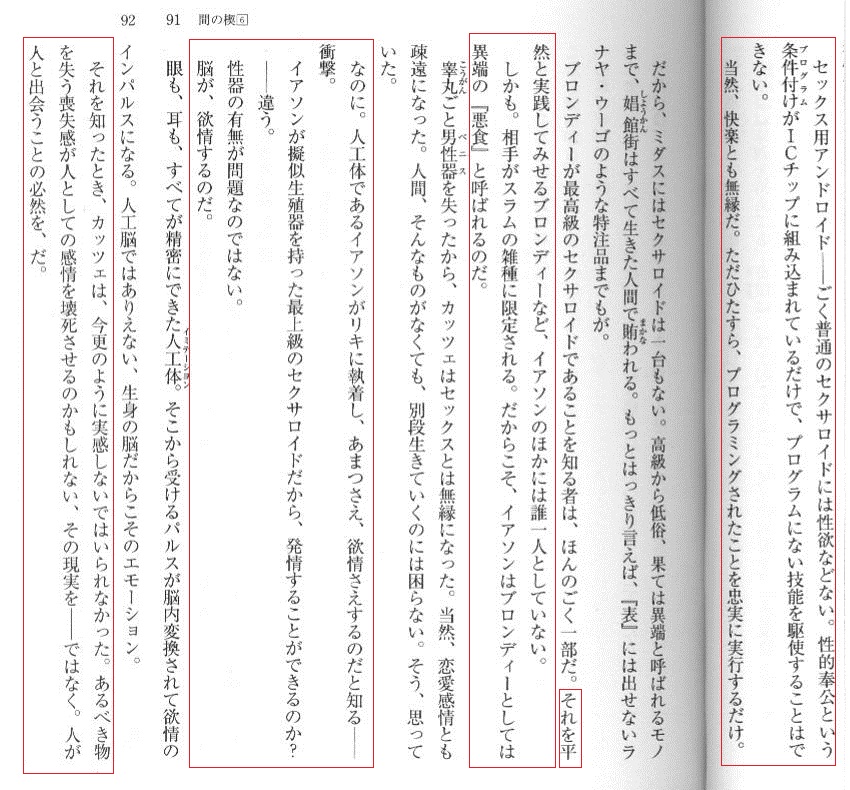 There were sexaroids -- The most common sexaroids did not have sexual desire. Sex was carried out according to the program coded within the implanted IC chip. They couldn't perform skills that were not specified in the program.
Of course, it had nothing to do with pleasure; they only followed the program loyally. "Which was why in Midas none existed. From the most expensive taste to the most……………………….courtesans.
The Blondies being equipped to be the highest grade of sexaroids was unknown save to a very few. Iason was the only Blondie that put his "function" into practice with a poker face.
Iason's tastes was limited to mongrels, which was why he was called a deviant.
Katze did not have a means to feel pleasure..........----- or so Katze thought.
However, Katze was shocked when he knew the humanoid Iason wasn't just obsessed with Riki, he also lusted after Riki.
Did Iason's lust come from the fact that he was the highest grade sexaroid with artificial genitals?
Katze knew that was not the case. It was not about the presence of sex organs. The human brain was the origin of Iason's lust.
All of Iason's senses ..........the reach of an AI.
After all of this time, Katze couldn’t help but understand a fact. Instead of feeling a sense of loss for his genitals he should have, made him possibly deny his own human emotions, what he realized was the inevitability of human coming into contact with one another.

Katze felt uneasy with what Riki casually said, and he was certain that it was not only a baseless fear.
Katze: "Break it off, it has been years”. (Katze was talking about Riki’s relationship with Guy)
Riki: “ I came by choice and it came back to haunt me ( about Riki’s first meeting with Iason and proposing Iason with sex).Because I swiped/swindled that fellow. (Riki is talking about pick pocketing a man within Iason's view and how he got into the whole mess so swiped works better than words like pilfered, duped, stole from, ripped off etc.) All these years, I’ve been wrapped around his finger and he did as he pleased with me.”
Katze: “If this is the case, then seriously you have to accept it. Dealing with Iason, even if you are justified, it’s no use.”

“違う。おまえが、PRIDEの権化みたいなBLONDIEをただのSEXARIODに引きずり落とした張本人だってことをだ。”
"No, I'm saying that you are the one who's dragged a Blondie, a man who's the very incarnation of pride, down to the mere level of a sexaroid."

Riki was thinking if he should ask Katze the question as an exchange for information, because Katze seemed to wonder why Riki has been moved to Apathia, since Katze didn't asked.

“なら。俺にはもう、あまえのことを想う権利まないのか？”
"Then, I no longer have the right to think about you anymore?"

Eng vol 8 p.127 // Jap Vol 6 p.202
Official translation:
“Slumdogs don’t belong in Apatia.”
“Riki suits being pet to a Blondy admirably.”
“SLUMの雑種に、Apatiaは分不相応はだけだろ”
” Blondyのpetは相応だと思うが？”
"Apatia is not suited for a mongrel.”
“It is suitable for a Blondy's pet, don't you think?"