Hi ladies, this partial translation of Vol 8 has been sitting in my computer for a long time so I post it here, although this community seems to be dead… (?) Hope someone is still following and will by any chance see this.

(My fan translation, sorry if it is full of mistakes, please let me know if I made any.) 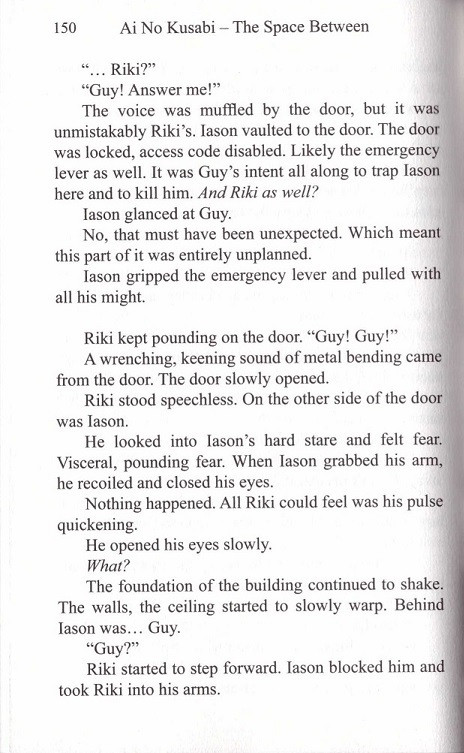 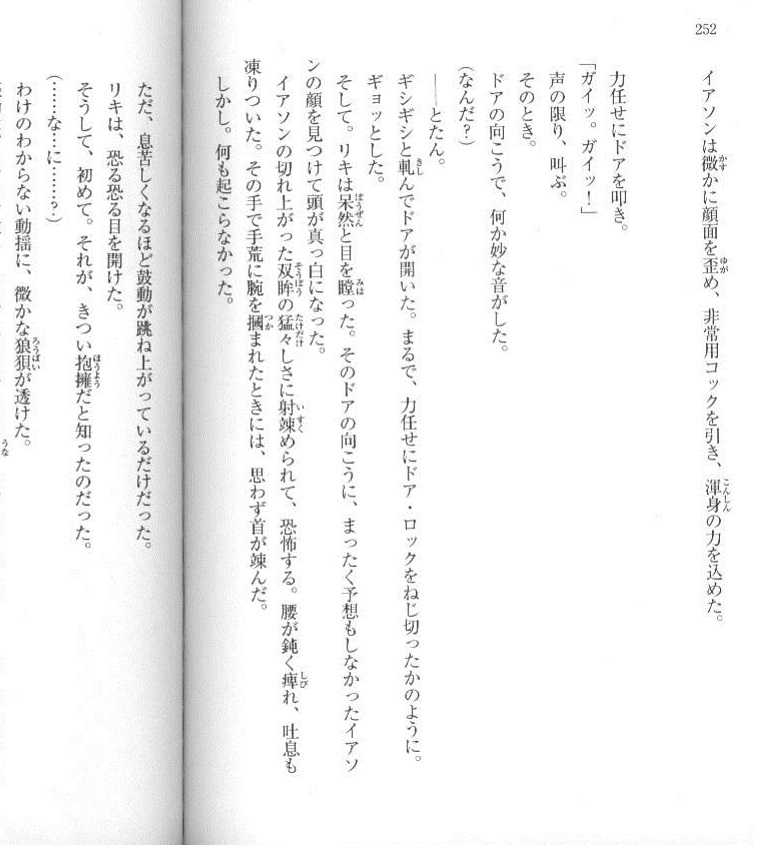 Riki kept pounding on the door, ‘Guy!!Guy!!’
A wrenching, keening sound of metal bending came from the door.
(What’s happened?)
The door was opened with a creaking sound, as if the door lock was wrenched with full strength.
Riki was startled and stood speechless. On the other side of the door was Iason. Seeing the unexpected face, Riki’s mind went blank.
He looked into Iason's piercing cold stare and felt fear. Visceral, pounding fear, his wrist was numbed, his breath was frozen. When Iason grabbed his arm, he recoiled and his neck became stiff involuntarily.
However, nothing happened.
All Riki could feel was his pulse quickening, suffocating him.
He opened his eyes nervously,
そうして、初めて。それが、きつい抱擁だと知ったのだった。
and then for the first time Riki knew, a tight embrace was given by Iason.
What?
わけのわからない動搖に、微かな狼狽か透けた。
Riki was a little flustered; his mind was wavering without reasons. 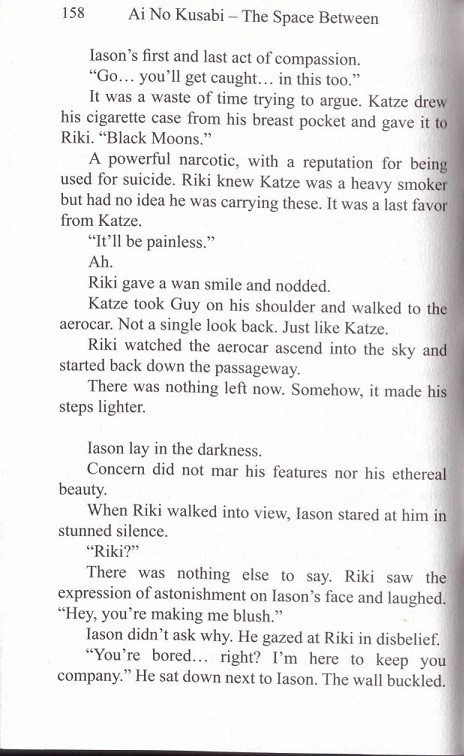 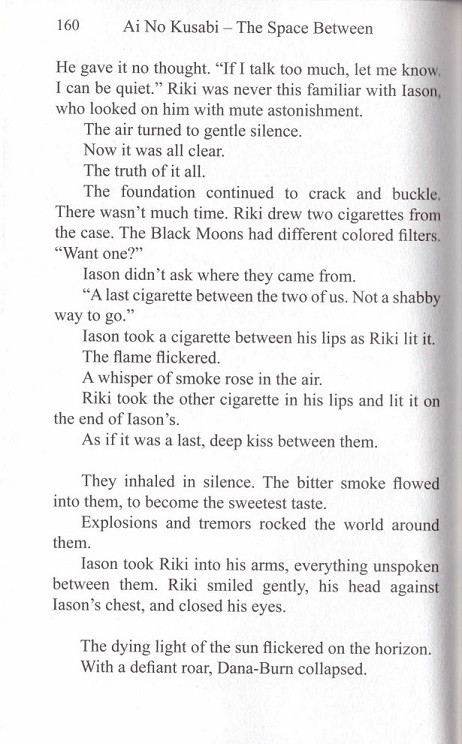 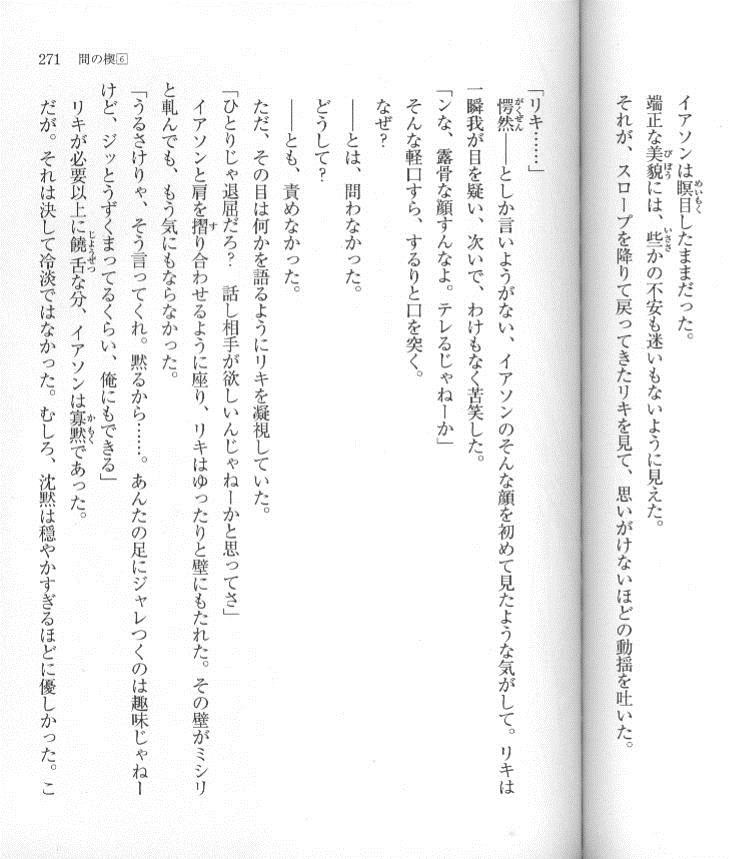 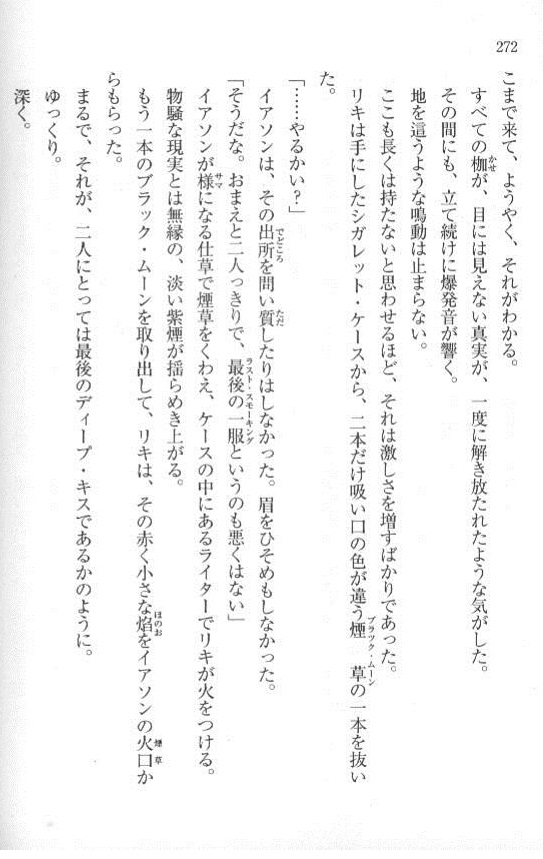 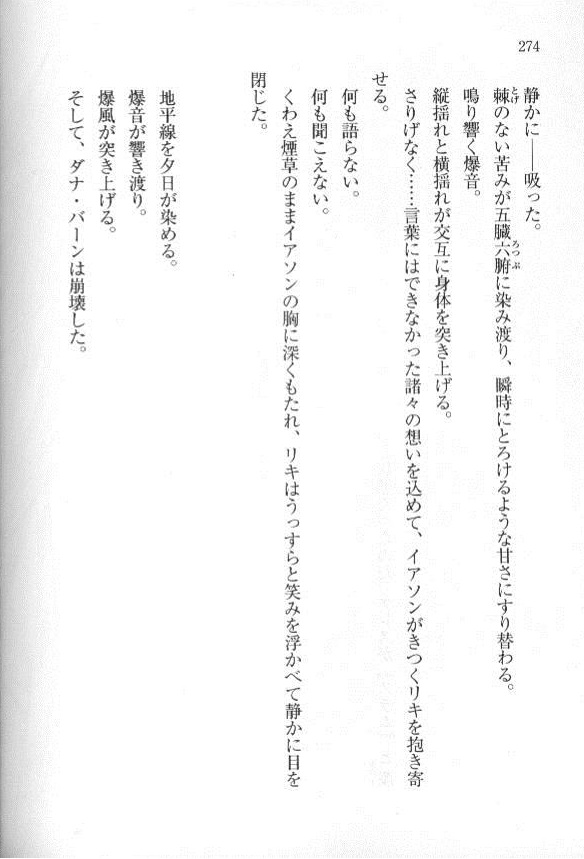 Iason lay in the darkness. Neither the slightest concern nor hesitation marred his ethereal beauty.

But when he saw Riki walking into his view from the slop, he was agitated unexpectedly.

Iason was shocked and had nothing to say. It was the first time Riki saw the expression of astonishment on Iason's face. Riki doubted his eyes for a second, then he gave Iason a bitter smile.

"Hey, don’t be so obvious, you're making me blush."

The jokes just slipped out of his mouth.

Iason didn't ask why, nor blamed Riki. He only gazed at Riki, as if he tried to say something with his eyes.

Riki sat next to Iason and lay on the wall relaxedly. The wall buckled. He gave it no thought.

“Making fun of your leg is not my cup of tea, but I can keep sitting down.”
RIKIが必要以上に饒舌な分、IASON は寡黙であった。だが、それは決して冷淡ではなかった。むしろ、沈默は穩やか すぎるほどに 優しかった。

Iason was reticent about Riki’s talkativeness, but he was definitely not cold; rather, his silence was mild and gentle.

Until now, finally, everything was understood.
すべての枷が、目には見えない真実が、一度に解き放たれたような気がした。

At the same time, they were released from all the restraint and truth that couldn't be seen before.

At this moment, the foundation continued to crack and buckle.

The rumbling that spread over the ground didn’t stop, the intensity was increasing, there wasn't much time.

Iason didn't ask where they came from, nor show any displeaseful.

"A last cigarette between the two of us. Not a shabby way to go."

Iason took a cigareete between his lips decently, as Riki lit it with the lighter from the case.

The flame flickered. A whisper of smoke was isolated from the dangerous reality and rose in the air.

Riki took the other cigarette in his lips and lit it on the end of Iason's.

As if it was a last, deep kiss between them.

they inhaled in silence.

The bitter smoke flowed into them, to become the sweetest taste.

Explosions and tremors rocked the world around them.

As if nothing was happening, Iason immersed in all kinds of thoughts that couldn’t be put into words, he took Riki into his arms tightly.

Riki smiled gently, his head against Iason's chest, and closed his eyes.