I got the book few days ago, I read chapter10 first and found out many lines were missing or mistranslated. I've no time to go through the whole book so I proofread some of the chapters.

Here are some of the errors and missing dialogues.

I did a rough translation so there may be grammar mistakes, and if I misunderstood any Japanese words, please correct me.

Words underlined in red were missing, in orange were condensed, in yellow were mistranlated. 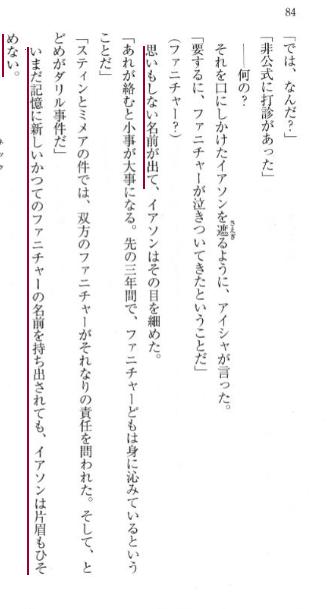 In that case for Paradita furniture, thinking of the impending trouble brought from the slumdog, the furniture was stressed to a point where it could not handle the routine work," Aisha stated flatly.

Just as if Aishia was telling the fact that he saw it with his own eyes, this truth made Iason felt far more unpleasant.

Iason glanced at Orphy, who kept silence and lifted the coner of his lips. Orphy seemed to be totally agreed with Aishia and was saying "I've also heard about this" in his heart. 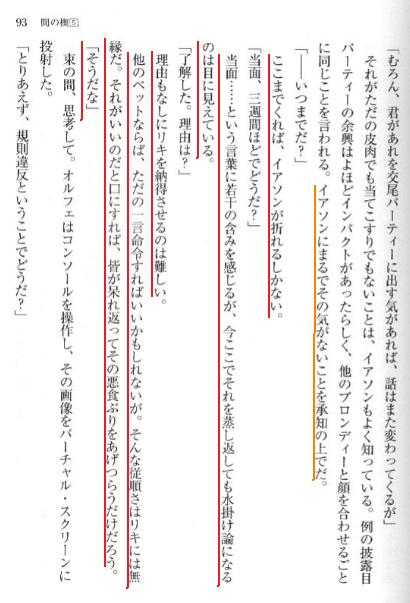 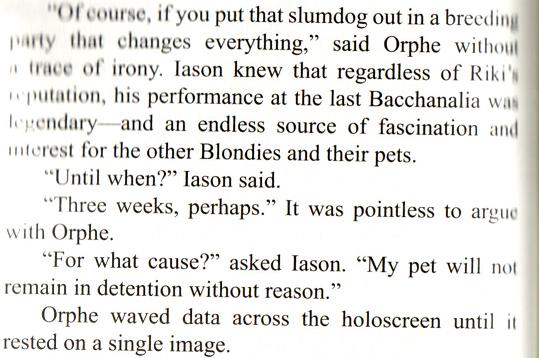 "Of course, if you put that slumdog xxxxxxxxx

interest for the other Blondies and their pets. Although Iason knew it very well, he was completely uninterested in it.

Up to this point, Iason had no choice but to give in.

"For the time being, perhaps three weeks?"

For the time being...... this phrase had several meaning, but it was pointless to argue with Orphe.

Riki was hard to convince without a reason. Other pet might just obey any order, but Riki was far from obedient.それがいいのだと口にすれば、皆が呆れ返ってその悪食ぶるおあげつらうだけだらう。(<-- I cant translate this)
"you're right."
Orphe waved data across the holoscreen until it rested on a single image. 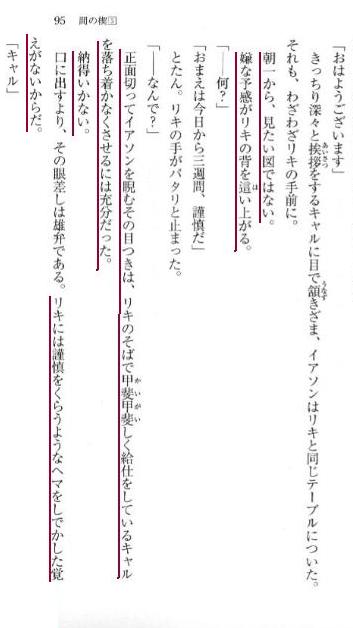 "Good morning, master." Cal said with deference. Iason nodded and sat down at the table in front of Riki.

This was what Riki didn't like to see in the early morning.

A bad presentiment rised from Riki's back.

"You are under detention for three weeks."

The direct stare from Riki to Iason was enought not to let Cal, who was serving breakfast efficiently beside Riki, to remain calm anymore.

The glare spoke louder than words. Riki had behaved so well that he couldn't recall he had done something wrong that will brought him punishment. 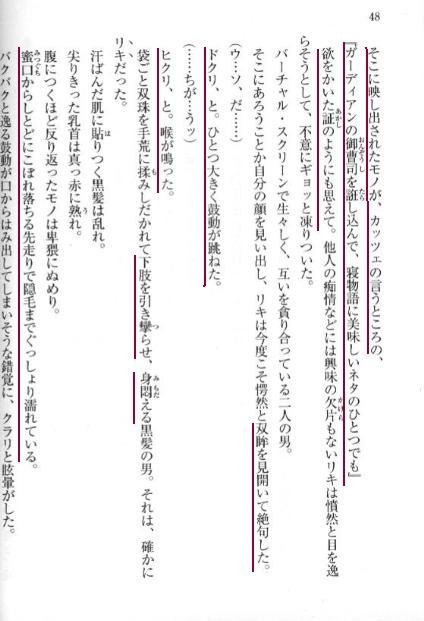 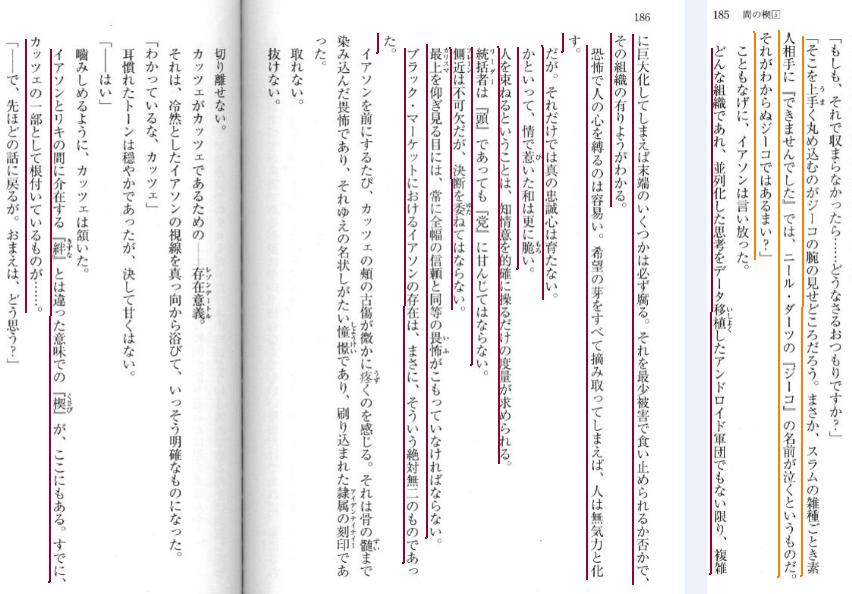 "Isn't it time for us to see Zico's ability? It will ruin the reputation of  "Zico of the Neal-Darts" if he can't even tackle mongrels from Slum. Zico should know this well enough." 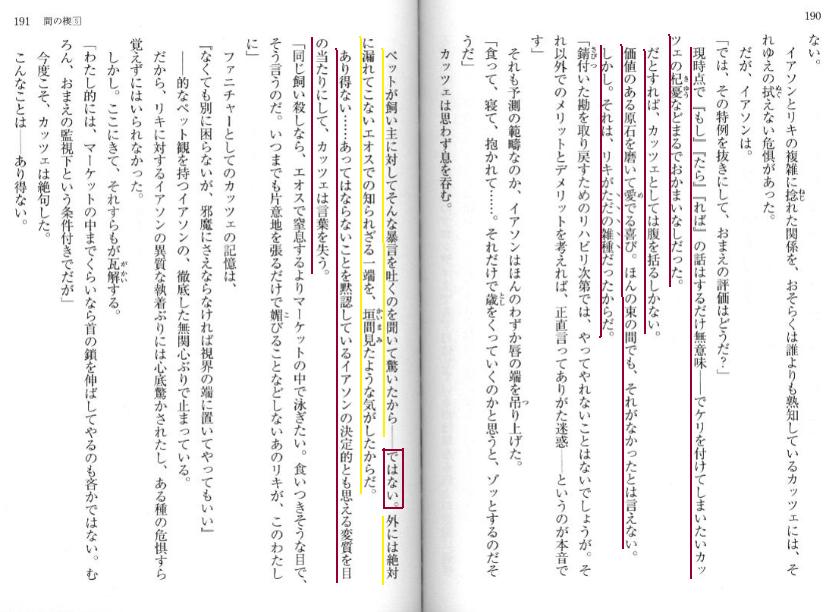 Katze held his breath. A pet telling his master in such terms was unfathomable.

The correct one should be:

Katze held his breath. It was not that a pet telling his master in such terms was unfathomable, it was because Katze felt that he had a glimpse into the dark side of Eos, the dark side that people from outside will never see.

Chapter 10 was poorly translated, again red words were missing, most of them discribe the sex scene.

I've no time to translated the missing part, here are the errors underlined in yellow.

And then, Iason broke into Riki's house at that night, after a year of seperation, when Riki was taken by Iason, he couldn't help but aweared of his hunger to Iason's caress, his body went out of control.

At that moment, it was the first time that Riki desired Iason from the bottom of his heart.

Riki was willing to give up his freedom. For enslavement, to be touched.

However, when Riki returned to Eos, he noticed that he wasn't the only one who had changed, the way Iason had sex with him was also different from the past.


Iason placing his mouth on Riki was proof enough.

chapter 10 was highly condensed, is it because of censorship? But the book is rated as "mature age" so this shouldn't be a problem :/

There're 230 pages for the Japanese version, and only 126 for the English version.

So that's why the book is so tiny!