I am looking for a metalworks/ironworks artist. We have a booth at an antique/crafts mall and are going to do fairs and highland games. We want to work out some consignment deal with an artist.

This year, why not get the most bang out of your Halloween experience by joining the party at Midnight, Friday October 30th when the Carousel Luxury Cinemas plays Peter Jackson's hilarious and insane zombie masterpiece "Dead Alive." This is the bloodiest, gutsiest, and brainiest (literally) zombie film ever made, and we're painting the screen red in beautiful 35mm!

Not only that, but we're hosting the ultimate costume contest where the winner gets $100 -- IN CASH!

Tickets are at a low, low $5 each, and include one free beer. Additional beer will be sold at a bargain $1.50 each.

So join us at the Carousel Luxury Cinemas on 1305 Battleground Avenue in Greensboro, NC.

You can buy your tickets here, and if you have further questions, e-mail movieshowjoe@gmail.com.

I am soon to be moving to asheville, and i am looking for a place to live. I would love for it to be a 2+ bedroom, with a washer/dryer(or atleast hookups), We have a little boy he will be alittle over a year when we move. So a yard would be nice. If anyone knows any that are avail please let me know.

Snacks and drinks will be available. BYOB
suggested donation: $10 adults, $5 kids, or whatever you want to put into the hat.

Heather Dale is a Canadian recording artist with Celtic roots, whose original music embraces the power of myth and legend, fusing this tradition with blues, jazz, and world music as well. She is often compared to Loreena McKennit, Enya, and Sarah McLaughlin. Check her out at www.heatherdale.com

Come and join us for an afternoon of song and good company!

GREESBORO, NC – Get ready to laugh, bowl and rock n’ roll with “The Big Lebowski.”

On Wednesday, August 26th, the Mixed Tape Film Series and WUAG 103.1 FM will present the Big Lebowski Rock n’ Bowl, a city-spanning event that will be a celebration of bowling, White Russians and one of the most beloved comedies of all time.

The Big Lebowski Rock n’ Bowl kicks off at 7:30 p.m. with a 35mm screening of the Coen Brothers’ cult-classic “The Big Lebowski” at the Carolina Theatre on 310 South Greene Street. Immediately after the film, Lebowski fans can knock some pins and make some friends at the Brunswick Triad Lanes on 21 Oak Branch Road, where there will be unlimited bowling and a dance party featuring records spun by WUAG’s greatest DJ’s.

Released in 1998, “The Big Lebowski” follows the life of Jeff “The Dude” Lebowski, a man of simple pleasures and questionable means who finds himself in a world beyond his comprehension after an unfortunate case of mistaken identity. Jeff Bridges shines in the lead role, reacting to brilliant supporting turns by John Goodman, Julianne Moore, Steve Buscemi and a very young Philip Seymour Hoffman.

Film critics and audiences originally shunned the film upon its release, however, due to a series of midnight screenings across the country as well as DVD sales, the film has become the greatest cult success of the last decade. Rolling Stone even went so far as to call the film “the most worshipped comedy of its generation.”

Other events in the Big Lebowski Rock n’ Bowl include a costume contest for people who dress like one of the characters from the film and bowling tournaments.

Tickets for the movie and all-you-can-bowl event are $14 and are available at any Mixed Tape Film Series event or online at www.wuag.net.

We are currently looking for a costume character performer you will be taking photos with kids, shake hands, hug, and wave to people. They MUST BE outgoing, friendly, reliable and able to have fun in a costume.

Have you ever wanted to be or work with costume characters? Are you outgoing, friendly, and fun?? Then come be a part of a fun promotion!
Event rate for character performers is $100 and for guides $70

Please EMAIL ME directly at:
costumecharacterperformer (at) gmail.com

A young man (Kyle MacLachlan) returns home from college and discovers a crucial piece of evidence to a horrible crime in an open field. But after turning the evidence over to police, the young man starts an investigation of his own, which sends him into the seedy underbelly of his seemingly peaceful suburban neighborhood.

Ranked as one of the ten best films of the last 25 years, Blue Velvet is a dark and beautiful masterpiece, and the greatest movie shot in North Carolina.

Trust me when I say that seeing this movie with a group of your most beloved friends is an experience you'll never forget.

BONUS: For those of you interested in the films we'll be playing at next year's Mixed Tape Film Series and Midnight Madness, we'll be offering an exclusive sneak preview. Plus there will be information on how you can purchase a season pass that will allow you to see all the films while saving a good chunk of money.

Today at 6:30pm is BeardsGiving - a Beards BeCAUSE fundraiser at CANS uptown.

BeardsGiving kicks off at CANS Uptown At 6:30pm on Monday November 17th, to raise donations for Beards BeCAUSE. Watch the Browns vs. Bills, Enjoy $3 Flying Dog Ales, Pint Glass Raffle, Free Appetizers & Support a wonderful cause!

$5 Minimum Donation at the door.
Bring a co worker, friend or family member with you!

The Voices Film Series "Big Brother, Little Sister" events in Hickory, North Carolina on November 12 (Children of Men) and November 19 (1984) are free and open to the public. 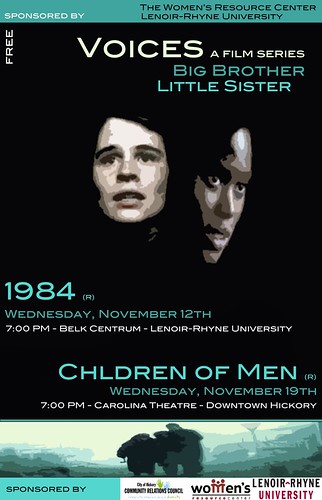 Read additional information here.
I know this isn't the correct forum - but I'm desperate - anyone in the Charlotte area - please read...

Harley has been missing since yesterday morning.

He is a 7 yr old orange tabby with a long tail.

He has a black collar with a name tag

If you know his whereabouts please email me ASAP.