As someone who loves the 80s and 90s as much as you, I've got a couple of tshirts on sale, and I'm slowly going to work on listing all of my 80s and 90s tees on ebay. 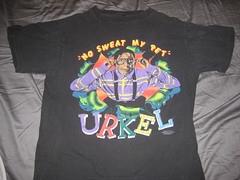 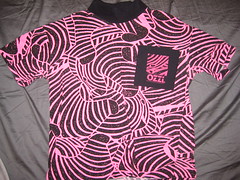 Thanks for looking! Keep spreading the 80s and 90s love!

Check out this 80's quiz. 2 second intros of a bunch of 80's songs. See if you can guess them all

Answers to the quiz can be found at
http://www.entertonement.com/clips/lfftztxclw--80s-intros

The decade according to 9-year-olds from allie garcia on Vimeo.

This has been driving me insane all week.

Does ANYONE else remember...

1) Tattoo bracelets? They were thin and plastic and twisted, meant to look like a generic tattoo? Is that what they were called
2) "invisible" jewelry? Thin, clear plastic strings with tiny rhinestones or charms on them?
3) Those beaded bracelets that look like this

only most were made of plastic. I still have several in my possession, thankfully :) Those were EVERYWHERE, and no one remembers what they were called!

All popular in late 90s, if I recall correctly (I was in about 7th grade, and I'm 22 now...)
Or am I totally insane? Or maybe this was just a local trend? No, it couldn't be that, I bought all that crap at Claire's in the mall, so I assume other places saw this stuff.

what were those toys called...

it was a palm sized box with a circle on the top. you'd put a piece of paper under the top and then put a weird shaped stencil (with a bunch of holes in it) in the circle (like an x or a circle) and put your pen in one of the holes and drag it all around the circle to make different 3d spiral drawings

One word..... Bowie.
Green Day is releasing a new album on May 15th, titled 21st Century Breakdown. Below is a widget where you can check out the new single, Know Your Enemy, and follow what the band has going on right now.

Anyway, here is my original entry that I had posted in response to the writer's block, before I deleted it. If anyone can help me by knowing which book I'm talking about, I would greatly appreciate it.

I don't recall what the name of it is, miserably enough. But it was a very ambigrammatical one--very Escher-esque. The book read about the day's events one way, then when you came to the end of the book, you flipped it upside down and told the rest of the events of the day til you got to the finish, which was at the flipped upside down beginning of the book.

The illustrations were black and white and when viewed rightside up, they showed the story, but when they were flipped upside down, the pictures showed something different.

I wish I could remember what the title or the author were. I'd love to be able to get that book again.

I'm bored and randomly researching random crap. I just found out that Eric Dane (Dr. Mark Sloane from Grey's Anatomy) was on an episode of Saved by the Bell!!! He played Tad Pogue in the episode where they have the volley ball game. I have tried to find a picture of him from that episode because I've seen it a million times and figured I would have recognized him but I never did. If you could find one and send it my way, I'd appreciate it. :)
Collapse