yeah I know the interview is with The Guardian and not Mundo Deportivo..;_;

In an exclusive interview, Dani Alves talks to Fernando Duarte about his move to Barcelona, the prospect of a first Champions League final – and his contempt for those cheat allegations.

I thought this was very interesting, especially the comments in regards to Busquets and the Pepe situation. I wish there were more interviews with him!

*please ignore the fact that I'm posting again
i have nothing to do :-(
plus, this is a very very refreshing read!

Referees In Tune With Team Tactics

Referee Wolfgang Stark (Germany) did an excellent job during the Champions League semi-final first-leg match between Real Madrid and Barcelona on Wednesday 27 April 2011.

He was in tune with the team tactics of both sides, and because of his experience, attitude, calmness and preparation, was able to manage the match as best as could be expected. Where we have previously seen other referees attempting to talk to players instead of handing out cards (e.g. Howard Webb at the 2010 WC Final; Yuichi Nishimura at various matches; etc) Stark did not shy away from making tough decisions during this bad-natured El Clásico match.

Here are some selected incidents with freeze frames. For the SUMMARY, please skip to the end of this long post.

The Catalan manager would have supporters believe he has little bearing on Barcelona's brilliance. Don't believe a word of it. 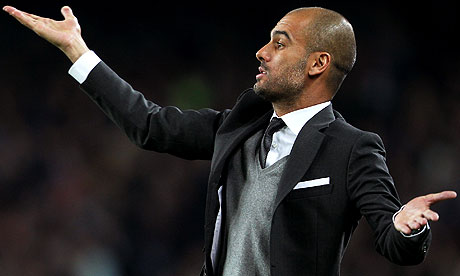 Hi! This is my first post. I hope I didn't screw it up. I thought the article was interesting and I am procrastinating a paper and nothing distracts me better than Pep.

Daniel Alves, footballer of FC Barcelona and the Brazilian NT, has stated that “unfortunately” he has already “learned to live with” racism in Spain, and that the situation is “beyond control” in Spanish stadiums.

I dunno what you guys think, but he deserves a HUGE PICSPAM.
(crossposted to ontd_football)

MARTI RIVEROLA ON LOAN TO VITESSE UNTIL 2012

Just when we thought the world couldn't get worse, this happened about a week ago.


Barça B midfielder Martí Riverola will play on loan with the Dutch team Vitesse until the end of the season.
( Collapse )

RFEF Horror Night - Episode 768
The Spanish Football Federation wants to avoid problems as the one from the last Osasuna - Barça (aka: Mission Impossible), in which the visitors (aka us) arrived late to the game (should we remind that it was their fault? Oh, wait...) , and they are going to propose a change of the law:  all the teams must stay the night before every game from La Liga BBVA and Copa del Rey away from home. As "El Mundo" says, they need the approval of its members, but they shouldn't have any problem with it , as most of the clubs are in favour.

Source: SportYou
Translated by me, miss_black91. If you find any problem with the translation, please, tell me ;)
Italics in the article are addings by the translator

Aaand here is the last of the current Football+ mag's issue of Barça-related articles! \o/

Again, as part of the Our 10 Men of 2010 feature, here is the bit on Lionel Messi, whom Jonathan Pippard and Tony Harper fanboy over. There are no Star Wars references, and again, there is probably not a lot that is Brand New Information for many of you, but it's still a good read. :) And away we go!

In football, unlike tennis or golf, swimming or track and field, there is no clear way to determine number one. And yet it seems many agree: Leo Messi is the choice of most football fans and, more tellingly, the players too.
( Collapse )

Source: Football+ magazine
Words: Jonathan Pippard, Tony Harper
Disclaimer: Spelling and grammar mistakes are probably my typos, sorry about that. Any factual mistakes are not mine though, so if you have a beef about it, you can contact Football+ and ask for Pippard's and Harper's addresses. :D

Over the weekend, I picked up Football+ magazine (Australian-based, thus all the hubbub about Australian football):

There was an article about Barcelona football's influence [on Spain's World Cup win] (AKA Sid Lowe fanboying over Barça) and a fair bit about La Masia, and I thought I'd share it here. Basically it's a whole lot of fanboying, which I'm sure we can all relate to. It's fabulous. :')
Here is the article!

[And here is a bit more about La Masia, belonging with the same article. Crybaby Iniesta! Awwww! :')]


Source: Football+ magazine
Words: first article, Sid Lowe; second article, Matthew Hall.
Disclaimer: Any spelling/grammar mistakes are probably mine, and I apologise. Any factual mistakes, however, are not, so please write to Lowe or Hall if you have a bone to pick. XD
Edit: Fixed a few of said [embarrassing] spelling errors, although I might've still missed a few. Please let me know if you see anything! :)

There are also two articles as part of Football+'s "Our 10 Men of 2010" feature, which, among others, covers Iniesta and Messi separately. For Iniesta, they fanboy (it's Sid Lowe again, jsyk) and talk about his humbleness and his hero-status, and they somehow incorporate Star Wars into it, idek, it's both hilarious and a bit confusing. For Messi, they talk about... well, they just fanboy over him. They take ten achievements of his and talk about Why He Is So Fabulous. :')
Would you guys be interested in reading about them? If not, that's cool. :) If so, should I smush them into the one entry, or separate them? (they are rather long articles, ftr)