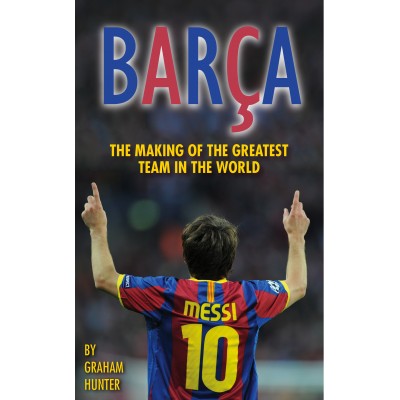 As you all may know already, there's a great book about Barcelona just came out a few weeks a go called Barça: The Making of The Greatest Team in The World, written by renowned journalist Graham Hunter. If you have purchased the book, do visit our book discussion thread over here and have a chat with other members about what's going on in the book.

Some info on the book:
Barça: The Making of the Greatest Team in the World is published by BackPage Press. It is available now in print and digital editions from Amazon, iTunes and www.backpagepress.co.uk.
You can Check out BackPage Press on twitter (twitter.com/backpagepress), facebook  (facebook.com/backpagepress) and watch videos with author Graham Hunter on their YouTube channel (www.youtube.com/backpage2010)

And guess what? We have good news! We are holding a contest to win one signed copy of Barça: The Making of The Greatest Team in The World!

All you have to do is follow the rules and answer the puzzle!

_fcbarcelona_with at least 10 comments posted.
3. Contestants have to have a full name, a valid email and a complete mailing address submitted in their entry.

The Puzzle
To be able to win the signed copy, you have to deduce 3 simple ditloids. What is a ditloid?
From WikiPedia:
"A ditloid is a type of word puzzle, in which a phrase, quotation, date, or fact must be deduced from the numbers and abbreviated letters in the clue. Common words such as 'the', 'in', 'a', 'an', 'of', 'to', etc. are not normally abbreviated."
For example:
Ditloid: PG b B c in 2008.
Deduction: Pep Guardiola became Barcelona coach in 2008.
Another example:
Ditloid: B w the 2011 C L a M U in W with g f M V P.
Deduction: Barcelona won the 2011 Champions League against Manchester United in Wembley with goals from Messi, Villa, Pedro.
As you can see capitals indicate a name, a major event/competition, a place (anything that needs capitalization).

Comment with your answers and your details -- comments will be screened so only us can see it.
Winner will be selected randomly from a pool of contestants with the right answers.
GOOD LUCK DEDUCING KIDS!

Comments for this post were locked by the author