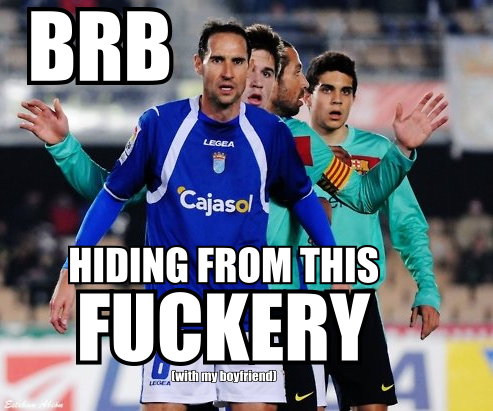 Carles Puyol: Barcelona's captain had been in emphatic form before the injury that has forced him out of the latter stages of the season. His hairstyle, however is kind of out of sorts. Newcastle would love to take the player on, the Geordie's have a number of players with that crazy tacky hairstyle. David Luiz' transfer to London should be a hint big enough.

Victor Valdes: The new 'Joker' was the remark I heard when he let Van Persie's strike in from a difficult angle in the UEFA Champions League encounter against Arsenal. We all know where 'Jokers' belong though don't we? Yes, the Emirates.

Gerard Pique: He loves his girlfriend doesn't he? The folks at Madrid have somewhat abandoned Shakira's music because of her ties with the Barcelona star. Be a good lad and move to England mate, save her career!

Thiago Alcantara: The next in line after Xavi hangs up his boots. But if he's looking for a mum and dad away from home, Arsene Wenger welcomes you with open arms!

Andres Iniesta: The man is a hate figure in London! The Chelsea fans' absolutely hate him! Payback time perhaps? Fancy a move?

Mascherano: Ship him back to Anfield under the banner 'damaged goods'..

Dani Alves: Manchester City boss Roberto Mancini has promised Dani Alves a handsome pay and his daughter's hand if he comes to Manchester.. Convinced yet mate?


BROUGHT TO YOU BY

tamings Y YO, FOREVER LATE ON WTF WEDNESDAYS. FORGIVE US?