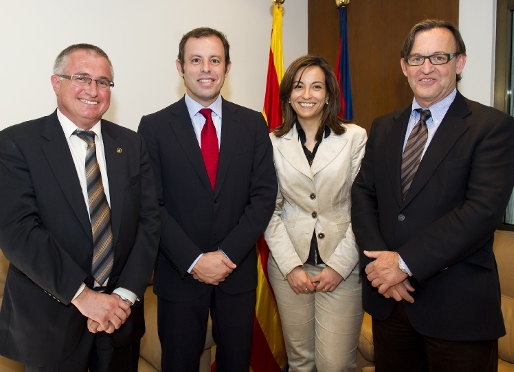 The president of FC Barcelona, ​​Sandro Rosell, the mayor of Manlleu Pere Prat, the mayor of Salt, Iolanda Pineda and the mayor of Vic, Jose Maria Vila of Abadal, presented on Thursday the new social project 'Futbol3' . This is a new program led by the FC Barcelona Foundation, which aims to promote human and social development in neighborhoods of Catalan cities identified as priorities for social action and community.
Three pilot projects

The implementation of the project 'Futbol3' will be held in three cities: Manlleu Salt and Vic, in collaboration with their local councils, and will work in different areas with different environments and methods of intervention as recipients. These pilot projects will be conducted with selected entities of the same territories and will transfer the methodology of intervention of FC Barcelona Foundation. It will also be carried out in partnership with Catalan organizations of recognized prestige.

The beneficiaries of the pilot projects will be groups of youngsters aged between 10 and 16, selected by the organizations of the region that collaborates in the implementation.

Satisfaction of the politicians

Iolanda Pineda, the mayor of Salt has admitted she is "proud of directing this project for the club" and said it promoted "values of harmony and cohesion". Pere Prat Mayor Manlleu, said "the name of the club helps the visibility of the policies about diversity in Manlleu. Meanwhile, Jose Maria Vila Abadal of Mayor Vic has confirmed that his city "has opted for football as a tool for social integration"
The CEO of the FC Barcelona Foundation, Josep Cortada emphasized that "Futbol3" will help "promote the values ​​of the Foundation in childhood and youth," while the attention is focused "on issues of our home. "

Dialogue as a tool to football

'Futbol3' is a methods of social intervention that has never been implemented in Catalunya,but there's been successful experiences in Colombia and Germany. The entities participating in the project will apply an innovative method to reeducate through sport. For two months, they will work with groups of youngsters from different cities, with issues such as cohabitation, discrimination, gender, etc. always through sport.

The key to Futbol3 is the dialogue. Through this tool, players (both male and female) not only enter into a relationship of mutual respect and understanding, but also acquire self-confidence and sense of responsibility.

The dialogue becomes, therefore, a part of the game and not a complement.

Some of the premises established by the methodology proposed by the FC Barcelona Foundation, amongst others, are the obligation of fair play and to promote the role of women in sport.

In many cases, the players before each match use dialogue as a forum to agree on the rules and then, in the post match talk about whether the rules have been respected or not.

salsademango
This is an amazing project. My mother is a teacher in Salt, one of the towns where this is going to take place and i am super happy they are starting this since it's a very troubled place with so many issues and i am convinced this is going to help many kids.
Apparently there's rules like each team has to have at least one girl and the team can only win the match if the girl has scored a goal.
I will try to keep updated about this and provide further information when it's going on.
With this, once again, we prove that we are indeed more than a club. <3