Cadet A reaches the top, winning against Vilassar (6-0). They gain the title with five games left this season. Pepper Garcia's team have become the first team football club of Barcelona to ensure victory.
( Collapse )

Barcelona's Juvenil A Team Also Become Champion of La Liga
One day after the Cadete A team wins their league, the team of Oscar Garcia also ensures victory with a tie in Cornella

Rafinha scored the opening goal a minute into play, and then Cornella equalized. Rafinha and Deulofeu had chances to score, but in the end it didn't matter as Barca were still proclaimed champions. 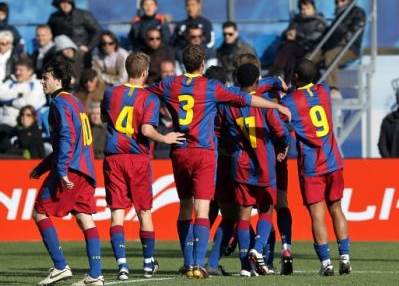 No party pics of the Juvenils yet ):
Collapse