GET YOUR TICKETS FOR THE ECHO HERE: 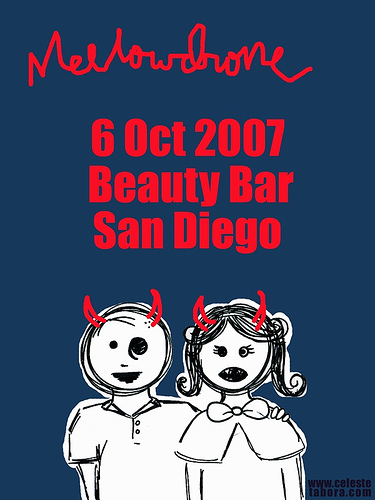 Nobody posts here anymore, but we should change that. Did any of you go to see them at the Key Club on Thursday? They played a wonderfully long set - all of box minus "c'mon n try", as well as "motivation" and "bitelip." It's the first show I've attended where everyone in the crowd seemed to be singing along and dancing, which made Jon smile more than once. That made me happy.

They also had some beautiful hoodies for sale, and Tony said the band was working on some new tracks for their second album. Hurray for that.

Mellowdrone is in Paste Magazine's Rock-N-Reel video competition!  Please go vote, and get your friends to vote, too!  More information is below:

Beginning during the actual physical Rock'n'Reel Festival, the Paste Fest channel will host selected short films and videos that will be shown in 4 rounds of competition -- 10 short films, 10 videos per week, starting September 15. Finalists will be featured from October 16 - 27, with the opportunity for community and film enthusiasts to vote for the winners. The online winners will be announced on 31 October and will receive prizes provided by sponsors DivX Stage6 and Spout.com. Entry into the competition is still available for music videos and short films, and can be found at http://www.pasterocknreel.com/2006/

"When we launched the Paste Rock'n'Reel Festival in 2005, we wanted to showcase quality shorts and music videos in a vibrant festival setting," said Tim Regan-Porter, President/Publisher of Paste. "Rock'n'Reel 2005 also gave us great content for DVD Samplers. Thanks to great technology like DivX and an accessible, powerful Internet community like Stage6, we can take share the Rock'n'Reel Festival experience with a global audience in a powerful, communal way."

After the end of the online festival, Paste Magazine will continue to offer viewers a wide selection of genre-busting video and music content on the DivX Stage6 "Paste Presents" channel. From short films to music videos, concert footage and coverage of festivals and cultural events, the channel will look to shine a spotlight on the "Signs of Life in Music, Film & Culture" that the magazine covers on a monthly basis. Expanding the experience available with the magazine, the Paste Presents channel will allow users to engage and interact with the content, viewing personal journal posts from Paste Magazine team, downloading additional material, and joining the conversation themselves, weighing in on their favorite bands and videos through interactive forums and user-created journals.

To join in on the Paste Fest channel in high-quality DivX video, visit  http://www.pasterocknreel.com/rate

About PASTE magazine
PASTE magazine prides itself on being the premier magazine for people who still enjoy discovering new music, prize substance and song craft over fads and manufactured attitude, and appreciate quality music in whatever genre it might inhabit from indie rock to jazz. In addition to its poignant music coverage, PASTE has become known for its thoughtful analysis on the best in film, books and other aspects of popular and alternative culture and provides a free 21-song CD sampler along with each issue. Now in its fourth year of production, PASTE magazine is distributed in over 12 countries and is available on newsstands all over the U.S. and Canada - including: Borders, Barnes & Noble, Books-a-Million, Tower, Hastings, Joe Muggs, B. Dalton, and independent newsstands and music stores everywhere with more being added all the time.

DivX Stage6 is a digital video community that allows content creators to easily upload video content and create custom channels to build and grow communities around their own unique brands. Anyone can distribute their DivX video content through the service, choosing to either offer the content for free or to set their own price to sell content directly to consumers. DivX is a digital media format similar to MP3 for video, offering higher quality with greater compression so users can view up to full High Definition video within a web browser. All DivX content available through the service is interoperable with the over 46 million DivX Certified consumer electronics devices, such as DVD players and portable media players, that have been shipped worldwide.

Tomorrow is Mellowdrone's concert in my city.

I am five months shy of being old enough to go. Thus, if there is, for any reason, some Winnipeggers out there is this community, tell me how it goes. Or, ya know, sneak me in.

Or just buy me a copy of Box so I don't have to order it online :)

But it's a pity. I really wanted to groove to Orange Marmelade and see what it was like to watch a man tear his soul out onstage with Bitelip.