Other:
Promote us in 2 other communities and post the links... sure..once I join some more cam whore ones :]
Make us laugh: ZOMG.... it's a radioactive chipmunk on speed. o.o
Why should we accept you? Cus I'd rock your socks. :3 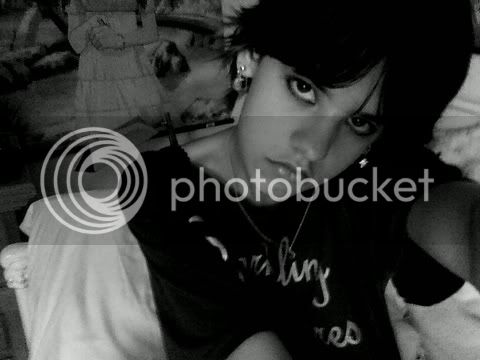 What You're Like:
Name at least 10 bands you listen to: 1905, The Evens, Circle Takes the Square, Death From Above 1979, Zao, With Honor, Against Me!, Dillinger Escape Plan, Remembering Never, Gravy Train!, Ladytron, Tsunami Bomb, Between the Buried and Me, BA'AL
Last show you went to: Yesterday, in SF at Slims. NFG, Eisley, Full Effect
5 movies: Run Lola Run, The Suicide Club, The Battle Royale, The Curve, Graden State
5 books: Days of War Nights of Love, James and the Giant Peace, Revolution on Canvas, The Perks of Being a Wall flower, Cut, umm.. the newspaper

Opinions:
Bush/Government: Fuck them all. I am an Independant.
Micheal Jackson: is not black
Davey Havok: has soft hands and a stiff hand shake and when he dances he ties his hair back in a red bow(he is always at Slims for shows)
Bob Nanna: Banana.
Anarchists: Fuck Anarchy. Stupid punk ass bitches, desturction, hate, violence, drugs. NO. Its all about anarchism. Coucil Communism. Shared wealth. Peace. Primitivists. Equality. No SLAVES, No MASTERS.
Homosexuality: My dream is to be a homo. so. my opinion = :)
Religion: Agnostic

Other:
Promote us in 2 other communities and post the links... umm.. kay? when i join another community, sure.
Make us laugh: its my job
Why should we accept you? cus everyone else is gross. you need me. (lol) jk jk

Your Mods= I dont have any. Heros and Mods suck ass. Why try and be like someone else. thats the stupidest thing ive ever heard.

What You're Like:
Name at least 10 bands you listen to:, armor for sleep, the early november, bright eyes, death cab for cutie, senses fail, mae, the hives, the flaming lips, coldplay, marilyn manson, the cure, the killers, rufio,
Last show you went to:Armor For Sleep
5 movies:edward scissorhands, gypsy 83, party monster, the breakfast club
5 books:bottled up, to kill a mocking bird, nothing feels good, prozac nation, what my mother doesnt know

Opinions:
Bush/Government: .. i dont really like him.. i dont care if he's from texas i dont support him. and i dont appreciate that i got written up in school for wearing an anti bush shirt
Micheal Jackson:.. i wish he would just admit that hes gay.. seriously
Davey Havok:.. awesomeness...
Bob Nanna: who?
Anarchists:.. they are cool.. crazy kids but they are cool and i wish i could be something like that
Homosexuality:i have a lot of gay friends.. and i love them to death so yeah.. marriage= love
Religion:

Other:
Promote us in 2 other communities and post the links. http://www.livejournal.com/community/___hellogorg/
http://www.livejournal.com/users/hayleyzabitch/ (sorry but ur thingys arent working)
Make us laugh:haha.. okay. hmm.. my dog is on a diet. and hmm...im scared of cotton.( like cotton balls or q-tips) i freak out if someone trys to touch me with it.
Why should we accept you?because i am a really awesome girl and i think this community is really cool

What You're Like:
Name at least 10 bands you listen to: Pearl Jam, John Lennon, Carbon Leaf, Staind, in all honesty, most of what I listen to is subtle new age or conducted, so can I list a few producers instead? Medwyn Goodall, John Mock, Peter Cairney, Emerald Green Productions, Earth Vision Musics, Brian Scott Bennett... I think that should do.
Last show you went to: Phantom of the Opera, I know, I don't usually go too often, but it was beautiful reguardless.
5 movies: Le Pacte des Loupes, The Hebrew Hammer, (yes, it's wonderful) The Labyrnith, (childhood classic) Without a Paddle, and Shadow of Fear.
5 books: O.O That's difficult, I read a lot of books. How about just what I've read recently? The Divine Comedy, Plato: The Collected Dialogues, The Path of Transformation, The Tao Te Ching of Lao Tzu, and Meditation by Barry Long.

Opinions:
Bush/Government: I'm green party, though Nader doesn't seem to capture too much attention. I don't know what's wrong with everyone who decided to choose between a puppet and an idiot, but I hope they are happy with what they got. -.- My governmental perspective goes far too deep to put into an application, but ask me some time if you're interested. I love a good debate.
Micheal Jackson: :: Shrugs :: No one is perfect, but who really cares. He still has his crazy fans that follow him everywhere, despite how hard he's tried to get rid of them... It isn't really an issue of innocence or guilt, it's all about the money.
Davey Havok: Not my style, but he seems like a nice guy. ^.^
Bob Nanna: Umm... I plead the fifth on this one.
Anarchists: It's the right idea taken in the wrong direction. It's more of a statement now than a feel of threat of power.
Homosexuality: Let them get married... for crying out loud. How does that even effect anyone else?
Religion: I strongly encourage people to take religion in a broad perspective, as being born into a specific religion isn't fair. A religion should fit a person's soul, not their rooting.

Other:
Promote us in 2 other communities and post the links. Eh, if I was in another community of the type, I would gladly promote, but this is the first I've applied to. I think it's slightly rude to post in a community to which you do not belong, or in a community that is focused on something completely different. So, if that means my not getting in, I'm sorry for wasting your time.
Make us laugh: ( Don't read this in a rare occasion you voted for Bush. ) The president, first lady, and vice president were all on a place together, when Bush leaned into his wife, smiling, and remarked, You know, I could drop a thousand dollar bill right now and make someone very happy. To which she quickly replied, Well, I could drop ten one hundred dollar bills and make ten people very happy. Cheney, feeling the need to intervene, responded, And I could drop a thousand one dollar bills and make a thousand people happy. They all started to laugh at this, as the pilot turns to his co-pilot and quietly says, You know something? I could drop all three of them and make 56 million people, along with countless others around the world very, VERY, happy.
Why should we accept you? I'm a fun person with a loud personality. I'm good for entertainment at times, and to consul in at others. I'm never one judge, have a wide perspective of what I find beautiful, and hold a keen sense of love for everyone.

Pictures:
Note: I don't have many clothed pictures, so I'll only post what's covered up in one sense or another.
And I'm sorry, I know that they are a little big, but I felt the need to go ahead and just make them part of the application away.
Also, about the face shots, I don't have any direct ones, but I can take some a little later if you need it before making a decision.
Thank you. ^.^